Lines Fiction: It is said that you view art as a way to spend your life. So drawing for you is a protocol of your everyday experience?

Kristinn Hardarsson: I would say that the boundaries between my ordinary life and art making is sometimes blurry. My works are more than often based on documentations of my observations of the life around me, the physical world and the one in the media. The documentations are mainly in the form of a written diary and photos, but also by drawing the old fashion style when traveling or wherever I am at the moment.

Lines Fiction: Basically your drawings and sketches remind of comic and graphic novels. Where do you see the roots of your art yourself?

Kristinn Hardarsson: I’m not sure about the roots. They spread out in many directions. But there are strong tendencies that have stayed with me more or less all my carrier.They are mainly two and even related: tendency to narration and the combination of the visual element and text. And of course these two elements are what makes the basic structure of the comic in general.

Lines Fiction: Your story “Burglary, Three Earthworms and the Icelandic Potato” was first exhibited as a wallpainting in Iceland and then as a vector drawing in the gallery Kim Behm Frankfurt and other places. The images give us laconic answers to our curiosity. Is the narrative aspect very important to you?

Kristinn Hardarsson:  It’s the story (or stories) that’s the most important aspect for me, text and the visual together, the formal side is more to support the feeling I’m trying to communicate. This work was painted and shown shortly after the financial crash in Iceland. I was working with the general insecurity and the nostalgia that permeated the atmosphere in Iceland, where I live, at that time period.

The narrative aspect is very strong in Iceland. It’s stronger in me than I wanted to admit for a long time. Even my works that are abstract have a narrative flavour.

Lines Fiction: The wall text and the animation is written and spoken in Icelandic. What makes you dub your work and on which occasion do you decide against dubbing?

Kristinn Hardarsson: I always write the text for my works in Icelandic and have them translated in english or other language if needed. The reason is plain and simple: It’s the only language I’m able to write with relative ease. It’s the same reason why the Icelandic writers work in their native language. They also often get similar questions, I believe.

This translation business is troublesome and expensive and often technically difficult to squeeze the translation into the work, like sometimes with the comics. Anyway for me writing in english in this context feels superficial.

Sometimes there are two language versions of the works. The printed version of “Burglary…” exists both in Icelandic and english. The work “Designs for Postcards” exist only in english, but if it will be printed there might also be an Icelandic version. So it’s not clean cut.

Your question also brings up another one for me: Why do you do art and for whom? which is too complicated to answer here.

Lines Fiction: your animation has an explicitly handmade appearance. Did you create moving images to experiment with the narrative flow?

Kristinn Hardarsson: My work in general have a tendency towards the handmade; more so unconsciously I believe. This particular work, The Fox, is constructed with the form of children’s books in mind and the story is even in some way not far from what you could expect in such literature, but in other ways not.

I´ve been gravitating towards the use of moving images for a long time and have been looking for ways to intergrade that aspect into my works. The narrative aspect is of course interesting but not less a certain dimension that you can get adding a movement to a drawing for example. 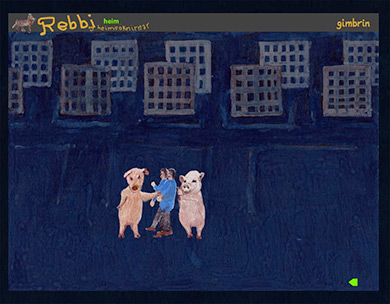 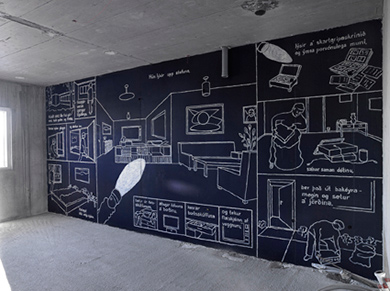 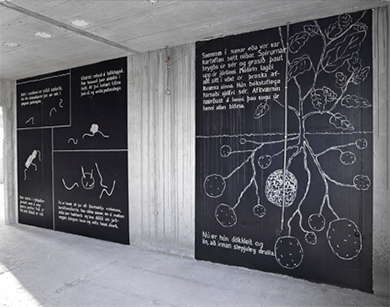 Burglary, Three Earthworms and the Icelandic Potato
The house is barely visible from the street; plants amongst other things conceal it.
The shadowy figure moves quietly, finds an open window and crawls inside.
Careful! Don’t wake the couple. He illuminates the living room, goes through the clothes in the drawers, scrutinizes the computer on the table, examines the desk drawer and removes the TV-screen from the wall, shines the light on the jewelry box and goes through some personal things, collects all the stuff, takes it out through the back door, and puts it on the ground.
In the earth, underneath the ground is a true heaven. Where the three earthworms eat their way through the soil. The friends stumble on a piece of dung. How lucky they are. From the gourmet food they blow out and become chubby.
They nibble on a piece of iron that gets in their way. There are very few things they turn down.
Now it´s time to visit their friend, the mother potato. While they all chat, the earthworms take the opportunity to loosen the earth around her a little bit and fertilize it.
Early this summer or spring the potato was put in the ground. The sprouts expanded and the stems speedily grew to the surface. The mother gave all her strength to the growth and the development of her offspring. She practically sacrificed herself. The offspring fed on her. They sucked nourishment from her and with it all her bloom.
Now she is dark brown and mushy, on the inside, slimy muck. 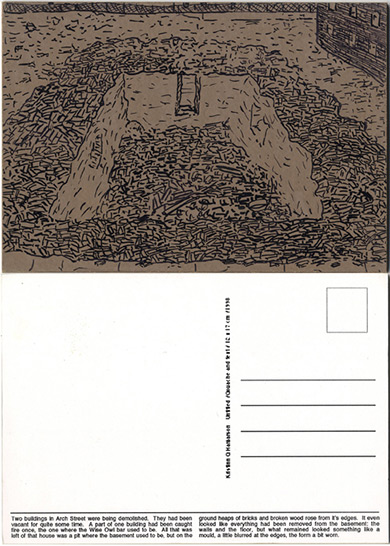