Lines Fiction: This website presents moving images as animations based on drawing. But you work with live performance, creating drawings in the process. On the other hand in the seclusion of the studio, you create drawings that show traces gestures of hand- and footprints.

I would like to talk with you about different forms of presentation, and the energy they include. A performance is characterized by its immediacy and physicality that can be witnessed by the audience like a moving picture in real time.

How is the difference between your drawings created in the privacy of your studio in comparison with the ones evolving in the performance?

Nicole Wendel: My studio drawings – like Panorama (1/2017) – take a long time in their development, sometimes months. For their big dimension you face them very physically, and at the same time, because of the complexity of texture in the drawing you explore the details only gradually. The visible hand- and footprints suggest possible motion sequences. The drawings in my studio show different process levels – impulsive ones, like in a performance, and then again slow constructing ones, all getting condensed in a multilayered pictoral space.

To draw in my studio I need precise preparation. The momentum for the first gesture on the paper derives from being immediately aware of myself in this very moment. The first improvisations put on paper as traces of charcoal and pencil evolve from an intuitive logic, from a rhythm in space and time. The shapes then are the starting point for new elements in the composition. There is a dialogue between gesture, abstract layers, and figurative structures, all together equivalent in the pictoral space, reflecting one another.

The performative aspect of my drawings in the studio has prompted me to think about choreography in my drawing process, and that resulted in the decision to start with performances in public.

Lines Fiction: Do you regard your drawings that evolve from a performance as a separate work or are they solely relics of the time based performance?

Nicole Wendel: The question about the autonomy as a piece of art is an interesting one when it comes to drawings evolving from a performance, documenting the performance at the same time.

A performance as The Circle concentrates on the movement, and works with the resulting chalk line on a blackboard that ends up in an installation. Therefore the medium film is very handy for the understanding of the drawing process in the performance.

In my last solo exhibition Présence in Colmar I developed the performance The Circle for the big hall. The size of the black surface (4 x 4m) on which I moved around reflected the dimension of the architecture, and the adjacent wall. Using the reach of my arms and legs I drew a quarter circle with chalk on a blackboard 180 x 180 cm in size, and then started to circle barefoot from this board to the black tissue underneath, carrying the chalk with my feet. Also essential for the concentration during the performance was the sound of a composition by Yohei Yamakodo. The music simultaneously affected my moves and the audience’s mood.

Lines Fiction: Is it possible to create a separate work of art by filming the performance or do you understand these recordings solely as a documentation?

Nicole Wendel: Both, the drawing and the film documentary complement each other in the installation, while I regard the performance basically as the actual work of art. In my performances I deal with the living, with the vulnerable, and finally with the ephemeral, therefore all documentation should be contradictive.
However, I find it important to let the drawings, resulting from the performance, have an effect in the aftermath. They preserve the intentions, the time and energy of the event. After the performance in Colmar, I leaned the chalk-board against the wall, emphasizing its imagery. That resulted in a gap in the circle on the floor, prompting the viewer to visually complement the form. It was as well important to me to present the film documentary of the performance during the exhibition.

In my very first drawing performance Tafel 1 and Tafel 2 I reversed my previous drawing process in using two landscape paintings by Caspar David Friedrich, each retraced with chalk on a blackboard, and recorded in a stop-motion movie. The concept of the performance was to walk barefoot over the blackboard, and thereby changing the image. The other chalk drawing was touched by my hands and equally transformed.

The arrangements for this performance was a key moment in my artistic work. In preparation for the performance I walked barefoot through woods and meadows, and was very aware of touching things in order to recall the sensory experience during the performance. These informations were not known to the audience, but they had their influence on the atmosphere between the audience and me. To me these drawings based on Caspar David Friedrich were only completed during the performance, and after their seeming destruction. At the same time they became relics of a performance.

The resultant movie is part animation part documentary of the performance, and as such a separate work.

The chalkboards are relics as well, and as such very hard to preserve. Therefore I came up with the idea of photographing the chalkboards, and print out these photographs in an edition. These mounted photographs have a special effect, because they don’t look like a print, but like a chalkboard, the appearance of the material is very haptic. Naturally they can be handled easily. But in my opinion the edition works only together with the movie clip, which again relates clearly to the performance.

As a separate work the film Rhythm & Turn could be understood, even though it documents certain movements. I’m fully concentrated on the drawing process, and the gesture of my arms. Sound, movement, cut, and the developing drawing together create a meditative atmosphere.

Nicole Wendel: In general, the drawings created in the studio are again impetus for new performances, for films, and new ideas. Currently I’m planning an animation that presents a synchronized mixture of performative aspects together with drawing. The dialogue between performance and drawing is a basic constant of my artistic work, everything is mutually dependent. And via performance a collaborative exchange evolved between different artists – like dancers, musicians, and me, creating new forms of expression. The idea of a collaboration with other artists becomes more and more central to my artistic work. 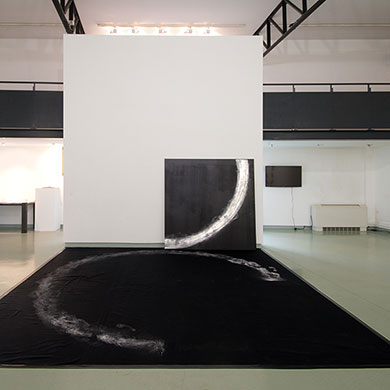 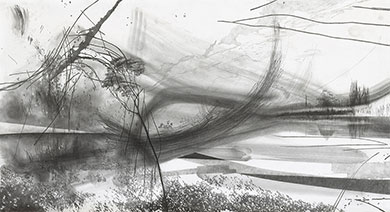 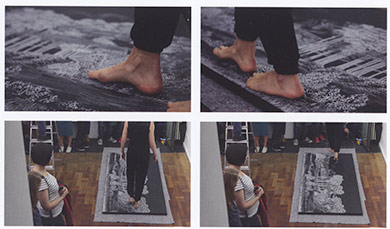