Lines Fiction: your drawings and collages focus on emotional conditions that are not easily to grasp. Your abstract drawings can be perceived as energy patterns. Do you see your drawings primarily as comments on the collages or as an examination of drawing in itself?

Hanna Nitsch: For some years now I’m interested in emotional interpersonal conditions that I try to transform into pictures, but I also deal with emotional conditions contained in certain imagery. In my opinion, drawing is the best artistic medium to explore this field. Between a feeling and the image there is only your hand, a pencil, and a sheet of paper. However, a picture is a very complex network of simultaneous dependencies and intertwinings, constructions and codings. Assuming that emotions and codes follow certain patterns, they emerge from a picture by means of four effects: color and shape, surface and line. As a first step I focused my collages on basic emotions like love or grief that are immediatly comprehensible emotional conditions.
In the collages my youngest daughter Elisabeth plays a role, as she does in many of my other works of art. She represents my younger “Alter Ego”, some sort of avatar, acting as artist in my stead.
After completing the collage, I started to examine the imagery again by means of drawing. Therefore the abstract drawings are less a commentary than rather the result of an investigation, an emotional de-coding. I have used different construction patterns like for instance the “Villiardschen Teilungskanon”, an early gothic drawing system based on co-ordinates, diagonals, symmetries, but also the “Golden Section” or the “Himmlische Mysterium” by Jakob Böhme. A scheme of emotion emerges in the drawing. You can read these patterns like energy streams that free themselves from the original image and become independent. Because something happens to the drawing that is not easy to verbalize. A new shape rises up, a second picture under the first one. The destability of the first one allows the emerging of the other one. So this process might also be an examination of drawing in itself.

Lines Fiction: The animation Kissing David Beckham shows the collages and drawings in motion and allows the “emotional codes” to flow. How do the moving images contribute to the essence of your art?

Hanna Nitsch: The most important aspect that brought me me to work with animation is clearly the time sequence. In the still picture everything appears simultaneously and the linear time axis plays no role at all.
With the collages and the drawings presented side by side, a straight pattern of emotional energy stream had arised. But as the word stream already implies, it is all about movement, about the “flow”. The animation offers an option to show this movement, and to incorporate the temporal aspect. That makes it possible to set up an additional dimension basic for emotions, that is movement and change. This “merge into one another”, and changing of shape I am only able to show by means of the moving image.

Lines Fiction: In a recent discussion about the moving image, one participant expressed his preference for drawings on paper, since they offer the freedom to be examined within an individual timescale, whereas the animation is constrained to the linear movement forward. Digital natives feel less dicomfort with this issue.
I would like to find out more about your decision:
I the exhibition you present the collage and the drawing side by side, and you leave it to the observers to find their own time span exploring the relations between the two. The animation with its cross-fades is more stringent in this matter.
Do you show both, the drawings on paper and the animation in the same space or is the pace of perception incompatible?

Hanna Nitsch: Yes, in the same room. I leave it to the viewers what they want to see first or maybe even not at all, but I offer both in the same space. Basically, both aspects in the project Kissing David Beckham are equally important and they are closely interlinked. For it is also not quite clear what was first, the film or the drawing/collage. Theoratically, collage and drawing could be a “still” from the film. The juxtaposition of collage and abstract drawing is demanding. But the transformation from the sketched energy code to an energy flow is only possible within the animation. Of course, watching the moving images requires the readiness to get involved in a rhythm that maybe does not correspond with your own. The animation also displays sound, different heartbeats, overlapping in the course of the film, and appearing very rhythmical. However essential, I prefer showing the animation in a modest size (for instance on a normal monitor) instead of presenting a huge projection. The sound too is not noisy, but clearly audible. 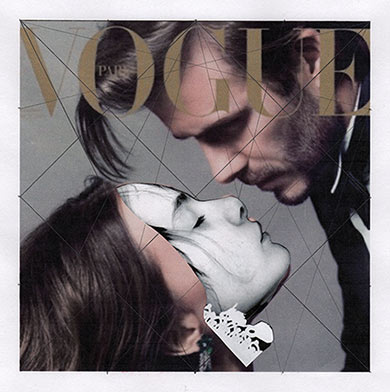 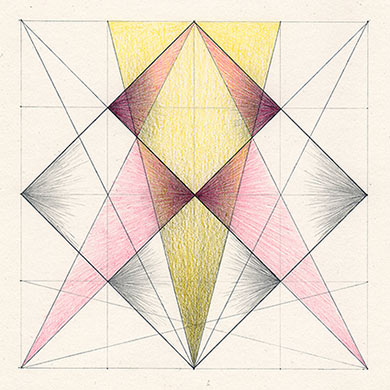 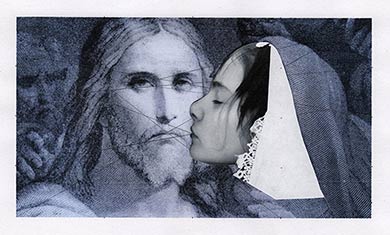 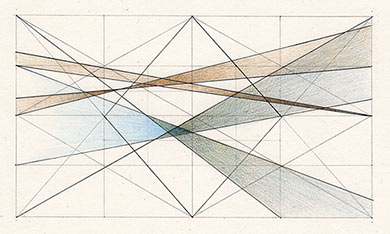 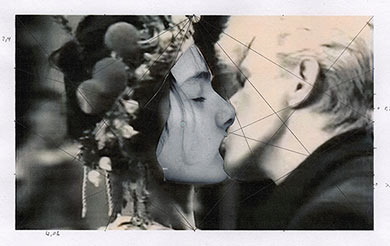 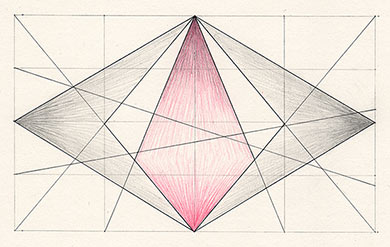 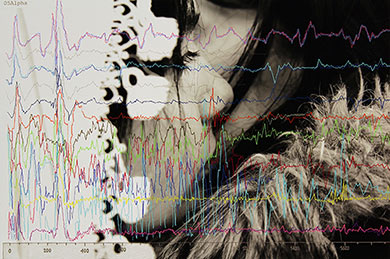