Fukt Magazine: You did your MA in animation at the Royal College of Art in London. Before you studied drawing, installation and experimental film at UdK in Berlin. Why did you choose to focus on animation? What is it with the medium that makes it interesting for you to work with?

Aline Helmcke: During my studies at the UdK I was totally into drawing, trying to expand the limits of the medium. I was very much interested in finding out more about the process of drawing and ways to capture and depict it, so the results were series of drawings which then got presented as series, installation… or a drawn animation film. This is how I became interested into drawn animation. To me animation seemed to bundle all the aspects I am interested in: the moving image/drawing or image in motion, its rhythm and a dialogue between sound and image. But the more I got involved into drawn animation, the more I began to appreciate the fact that I am also working on drawings that are still and explicitly not part of an animation film.

Fukt Magazine: How important is the presentation of the animations? Do you prefer to work in a gallery setting with installations, or screenings/film festivals?

Aline Helmcke: I choose the gallery space when presenting a multi screen installation or when I want to show my films along with my drawing series. Very often the outcome of my investigations are drawing series/objects or installations as well as a drawn animation film. The gallery context gives a wider sense of what I am trying to tackle than just watching the film or looking at the drawings separately. On the other hand, I really appreciate the concentration you’ll find at a festival screening when sitting in a dark cinema space, as well as the context of other films your own film is getting involved with. So I am really happy with the fact that both ways of presenting my films are possible.

Fukt Magazine: In the work “Filmbox” (2009) you are working with animation on 35 mm film, an interactive piece where the spectator is asked to set the film in motion. Can you tell more about this piece?

Aline Helmcke: I made the Filmbox towards the end of my studies at the RCA. After two years of solely working on animation films, I felt that this was not the only thing I wanted to do, but just one way of thinking in (moving) images. The Filmbox is a result of my discomfort with the fact that the film industry dictates the aspect ratio the film-maker has to work with. I decided to unlimit the film frame and drew on 35mm blank film in a horizontal manner. Moreover, I didn’t agree with the fact that the audience usually doesn’t have any influence on the speed in which they can watch a film. I wanted to enable the viewer to decide about it by himself individually by turning a crank. So in a way, the Filmbox is a critical response to the limitation the film medium determines.

Fukt Magazine: Do you have any artists or filmmaker you find especially interesting for the moment?

Aline Helmcke: I very much like Simon Faithful’s work, which is also represented on this website. Also, Anthony McCall’s “Line describing a cone” from 1973 is one of my favorite pieces (he probably wouldn’t consider it as a drawn animation, but for me it is a drawn animation breaking boundaries).

*Fukt Magazine is a periodical published by Björn Hegardt 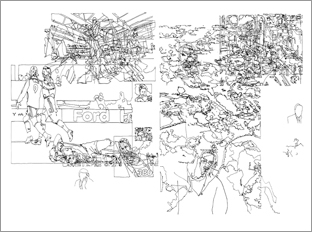 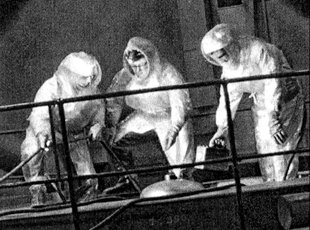