Lines Fiction: In “Navigator” you offer different choices that lead the user to the next view. That piques the user’s curiosity, what might have happened with another choice of button to click. Do you still emphasize this ambiguity in your present digital artwork?

Jorn Ebner: By asking users or viewers to interact, the work of art creates a certain intimacy. The individual is engaged in a process that to me is quite similar to reading a book. The new technologies enable this interactivity and through use of the internet people are somewhat initiated to interactivity in a computer-based work of art. When in 2011 I produced “(The Beatles) in Hamburg”, a sound work with an online component, I was keen to keep this level of ambiguity. That piece is also expecting curiosity from its visitors and it asks them to investigate and find more stuff – or come back on another day to find something different to today.But I also have a problem with interactivity for interactivity’s sake and when the web 2 craze began, I embarked on a series of works for browser that were just animated sequences of pop-up windows that function just like a video and require no interaction at all. So the short answer to your question would be yes and no. Just as in real life.

Lines Fiction: Netscape Navigator was one of the first browsers for the internet, and thinking of a Navigator online, one expects an interface that provides the user with information while clicking through pages. Your interactive artwork, though, is opening up views on scenes that seem enigmatic, mysterious, and in a strange waiting stage. Did you plan this artwork for online showing?

Jorn Ebner: Quite the contrary. “Navigator” was developed for CD-Rom in 2006. At the time, I was disillusioned with the internet and my role as an ‘internet-artist’. After a series of online works, I wanted to experiment with other forms that might be less dependent on browser development. The results were stand-alone pieces such as “Navigator”, “JC” (my visual complementation to a John Cage performance by the Bruckner Orchestra at Ars Elecronica Festival, also in 2006) or still images (‘electronic drawings’ as I call them). However, the medium of “Navigator” is an internet technology – it was originally a Flash stand-alone file. Re-formatting it for online presentation by Lines Fiction wasn’t posing a problem – one of the advantages of Flash.

“Navigator” developed from a very specific context: it was commissioned by a UK organisation called Creative Partnerships, which placed artists within schools. My piece was intended to be used in a special needs school, where children had difficulties navigating their home town. I drew a set of electronic drawings that would form the basis for introduction and framework of “Navigator”. Additionally, in a series of workshops, the children drew images of their environments and took photographs. All of this material was re-worked by me into a series of drawings in a graphics software called Freehand and then animated in Flash, a software for online animation that was also great for creating interactivity (or still is). These animations form the larger part of “Navigator”, where viewers have to make choices and decide which path to take.

Lines Fiction: The style of drawing in your interactive artwork seems connected to your drawing style on paper. The nervous line that builds up in “Navigator” recurs in your drawings as cluster. Did you develop both, drawing and animation at the same time?

Jorn Ebner: When I was studying, I had an interest in animation and I created proto-animations using slide shows. I developed a very simple style that was inspired by a Buckminster Fuller sketch. This style was of advantage when producing my first online work in 2000 called “Life Measure Constructions” – a piece that I always understood as an interactive drawing – as my simple drawings kept the file size small. Up until 2004, I produced three more works, “Lee Marvin Toolbox” (2001), “Leif Codices” (2003) and “Leonardo Log” (2004), interactive drawings if you want, each including increasingly larger file sizes. During those years bandwidth was quite limited and I was always on the brink of overloading the online animation files with information. For “Navigator” the original drawings had too much information and I often had to reduce, for instance, transparent areas and similar.

My interest was to draw images that were digital but where the viewer is not quite sure whether they are analogue or digital. As I never liked the term ‘digital’, I prefer to call them ‘electronic drawings’ as opposed to analogue drawings. When I made electronic drawings, I tried to make them look like analogue scribbles, in order to emphasise the human input. Eventually this also became part of my analogue drawings. In all cases I am drawing with pencils – on paper or on my old Wacom tablet.

In Flash, the drawings are animated on the timeline. That means that the animation consists of a series of frames similar to analogue film. Lines are manually created across frames, not by using some of the Flash features such as moving elements along a predefined path. In traditional animation, that would have been one image per frame. In this way, I also disected photographic elements into smaller parts: I broke apart photographs and drew/erased lines into them. It is a laborious way of working and maybe not the way you are supposed to do it.

Now, my recent analogue drawings are quite information-rich with multiple lines layered on top of each other. If I tried this in Illustrator, the files would become too large, slow down the machine and the application, and become very tedious to work with. For me this is interesting as I can produce drawings that are distinct from electronic drawings, and vice versa. At the same time they seem to be quite alike but each displays something that the other cannot do. 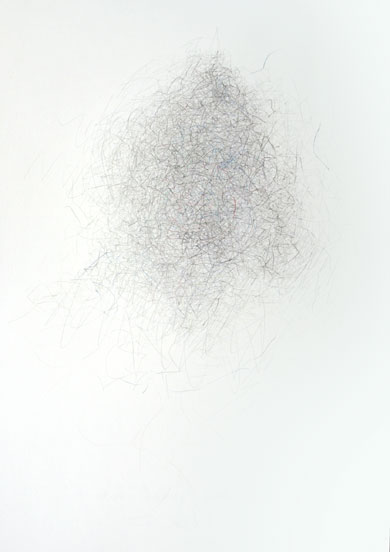 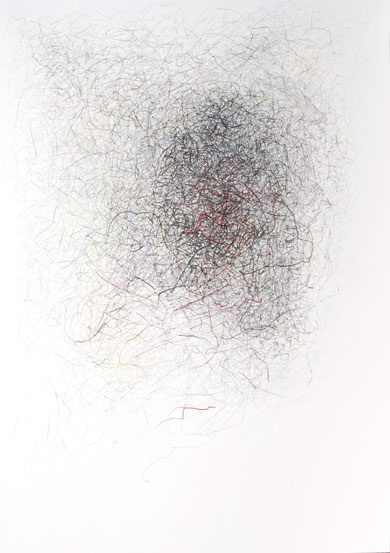 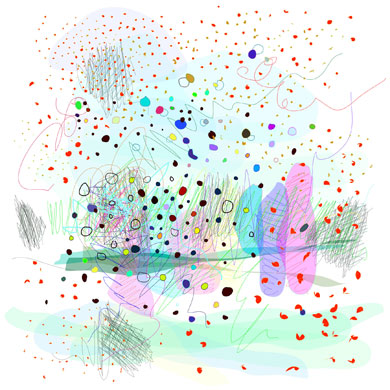