Lines Fiction: Your drawings refer to ornamental Islamic art, and in their non-representational approach, they do not as much follow abstract thinking but an explicit mathematical projection, right?

Lara Faroqhi: I am not so interested in an aethetic art diaIogue but rather how drawing connects me to the world. When a drawing goes well, it opens this field of being deeply engaged in playing, which we have all experienced as children. Playing is a very natural possibility for us to relate to the world, and so deal with minor and major problems. As children, my sister and I, built a fantasy world around our Indian-Muslim grandfather who we never met and who our father would not talk about. But the absence of a story can create new ones. The endless patterns embody such an imagined history. Of course, there are other layers of understanding the drawings. On another level, the geometric forms for me, speak about the complex idea of a unity (call it “God”) which is disturbed, injured, broken.

Lines Fiction: Talking about disruptions that become visible in your drawings, you want to address things being endangered in their entity?

Lara Faroqhi: Yes, this is what lies at the root of the Alignment drawings. How to deal with this problem of losing control, of ensuing destruction, of loss and resulting chaos. This conflict is what I needed to externalize in these drawings. By printing over the mathematical constructions, by consciously messing them up, I was disturbing their order, questioning it. Then I enlarged the sections where the “mistakes” occurred and put one drawing layer over the next onto the original patterns creating a new, chaotic pattern. Paradoxically, piling up the layers of disruptions in this way gave me the chance to work through the conflict, which found a shape, becoming tangible through the process of drawing. Underneath the drawing are a few chapters of Susan Sontag´s essay Illness as a Methaphor, in which she compares the two major illnesses of the last centuries with each other (tuberculosis and cancer) in doing so she unravels and demystifies the underlying myths that have formed around the illnesses. In my drawings I also use this unravelling process by laying images of disruptions, and by doing so I demystify the power and the fear of disintegration through chaos.

Lines Fiction: In your drawings, musical structures become visible. All the more in your animations, where musical themes are forming the images. Interesting to watch, how in your animation Four Steps drawings of staircases, trees, and reflecting lights appear and disappear with the music. How was this piece going to happen?

Lara Faroqhi: I have been collaborating with violinist Juliane Manyak from the Berlin Radio Symphony Orchestra (RSB) since 2015. We have found a very productive dialogue between her musical and my visual work. Juliane played this passacaglia for me as a birthday present two years ago. This gift forms the basis of the film.

The film describes many things that have been present in other works. Four Steps is about movement, about walking (the word passacaglia comes from the Spanish term “pasear por la calle“, which means “to walk through the streets“). I live in a typical Berliner Altbau (an old building) on the top floor, climbing four flights of stairs daily and often loaded with stuff (so the steps need to be taken carefully, there´s time to observe). During my climbs, I have been noticing a strange thing: when walking down a flight of stairs, the bars of the railings always run counter to my movement: when I climb up, the bars go down and vice verser.

The “walking” movement of the passacaglia for me is described by flipping through the pages of my sketch book, showing diary-like notes, sometimes rough, sometimes more pronounced. The turning pages show a movement like that from one thought to another; they are also like a short break between musical phrases. When I shot the film (which took 1,5 years), I didn´t mind if technical imperfections found their way in, like a blurred image or a sun spot on the paper. On the contrary, this film is not just about the process of making, it is also about the process of looking, and looking again (so a tree can have different appearances).

The final editing process (with the help of my twin sister Anna Faroqhi) is just as important. Here, we looked at the general rhythm of the different visual frequencies, and how they connect. In relationship to the music, the image is not there to simply accompany and visualize it. At times, the animation consciously unfolds more slowly or more quickly than the music. This builds up tension and gives both music and image its own space. 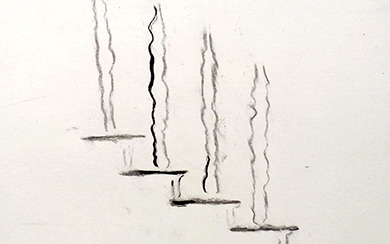 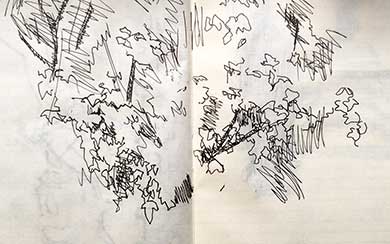 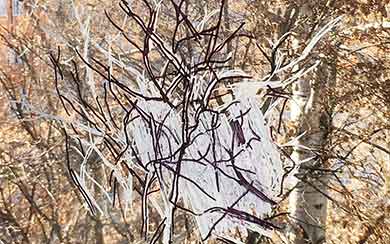 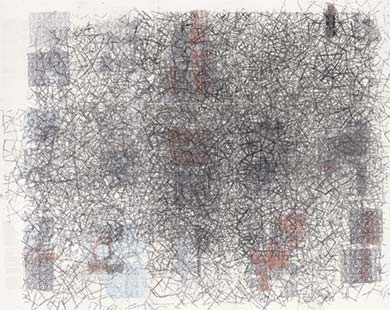 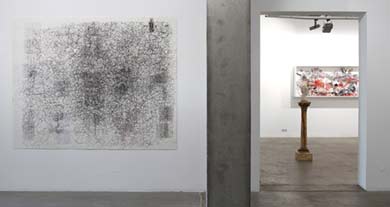