Lines Fiction: You are an artist and designer using india ink, watercolor, and wax crayon in your drawings. You also translate this technique into your animations, creating a sensitive and somehow haptic atmosphere. What are your intentions using this drawing style?

Sarah Jane Lapp: In the digital age, I continue to draw with crow quill and ink because I crave, like a vampire, the direct kinesthetic contact provided by hand, paper and pen. I could live in my own drawings; they are tidier than my own studio and populated with oft-inaccessible humans e.g. the person I see from the bus window, hobbling over cobblestones, wilted lilies stashed in the back pocket.
The detritus-free potential of digital production intrigues me, primarily for its ecological promise. Fellow filmmakers contract cancers from hand film processing; my own animation papers destroy trees. Were I a true environmentalist, I would trade film/art production for stand-up comedy: the city could recycle my jokes at no cost. But selfish genes want to replicate; my RNA chose drawing as its vehicle. Each little promiscuous chromosome hides in a line, as my hand defends its own hand-i-ness. I am teaching myself to copulate with a computer, but evolution happens slowly.

Lines Fiction: A very important aspect in your movie “Chronicles of an Asthmatic Stripper” is the music. The soundtrack is a performance by Mark Dresser, a bassist. how did this cooperation happen?

Sarah Jane Lapp: You have to understand that working with Mark Dresser has been an incredible privilege.
He’s the top in his field and I met him when I was, maybe 28? (I will be 40 this August).
I feel like I grew up artistically with him…
Our chance meeting at the MacDowell Colony (an artists’ residency in the US) makes me think that the universe has bigger plans for us humans than we could every imagine.
We have made four projects together and often call each other on the phone to share bad puns. He is like family now.

As for the specific history with COAS, I will respond with words from Mark Dresser which he wrote for a museum catalogue:

“I’ve had only one month-long residency at MacDowell, which was in September 2000. What fortuitous timing that my first three days coincided with Sarah Jane Lapp’s last three days at MacDowell. She invited a bunch of us to a viewing of her films and to check out her studio. I was moved by Happy are the Happy, an unusually subtle and moving film about the Holocaust. I expressed my enthusiasm for her work and felt compelled to give her my recordings for silent film. We stayed in touch and began collaborating. It was easy at first, as we were both living in Brooklyn. I recorded some solo bass sketches for a film in production. Sarah Jane was concerned about how to pay me. I laughed and said, “Let’s do an exchange” – would she consider making a short piece for me to perform solo? She had the idea for the Stripper and I had a deadline for a tour. Sarah Jane spent her next residency at MacDowell faxing me many pen and ink drawings. Meanwhile, I composed, mailing her tapes and even once playing my themes to her over the phone…”

Lines Fiction: In your animations the topic remains enigmatic, your images riddle our imagination, and they give us a surreal impression. You also combine live action and animation. Do you have role models in the history of film and animation?

Sarah Jane Lapp: It’s funny, I never think my images are so enigmatic, which must be a sign of my own megalomania…Last night I realized I’m still obsessed by mattresses.

Role models? Where does one begin?

So, I think the first animation that had nothing to do with Warner Bros that I saw – that is, the first animation that allowed me to think my sensibility had room in this world – was Svankmajer’s “Dialogues.” Similarly, Tarkovsky’s “Zrcadlo (Mirror)” gave me that same sense of aesthetic liberation…I remember watching an old VHS while sitting on the floor of FAMU’s library and trying to disguise my weeping from the Czech librarian…
His insistence of a reformulation of synchronic/diachronic time…the audio that transcended diegetic space…and entered this state of grace…

Obviously the Eastern European canon of cinema dominated my brain in the 90’s when I was a student in Prague…Vera Chytilova’s “Daisies”; early Milos Forman…

Misha Pavlatova’s films gave me a permission to explore relational dynamics with humor…She was also incredibly encouraging when I showed her my very first animation attempts. She said, “Cerstvy!” which, I think, means “fresh” – or maybe I misunderstood and she meant, “Um, go get a new piece of paper and start over…”

Similarly, the d.’p’s I worked with at FAMU (when I did live action work) blew my mind – their patience and their ingenuity and their vision, especially Ramunas Greicius. That was magic. Oh, if I could afford to work with him again! Ramunas, are you listening?

Finally my graduate work tenure at School of the Art Institute of Chicago introduced me to work on the other end of the production continuum. The American Avant-Garde…Hand-made, artisanal craft, Shellie Fleming’s films of brilliant fragility, Dan Eisenberg’s haunting “Displaced Persons”; Nancy Andrews’ bravely brainy animations; Chris Sullivan’s savant-like characters… Nancy showed me Caroline Leaf’s “THE STREET” and I had that “a-ha” moment when I encountered her luscious visual metamorphosis;

My own cohort inspired me to no end – we were a funny mesh of neo-neo-realists and hand-processing mavens and documentarians. My peers were tremendous and continue to make amazing work across numerous genres: Jenny Perlin, Amie Siegel, David Gatten, Apichtpong “Joe” Weersanthankul, Dima El-Horr, Daniele Wilmouth, Erika Mijlin, Julie Goldstein, Chris Harris, Josh Gibson, Shuk-Shan Lee, Tchavdar Georgiev. It was kind of insane. Everyone is still at it today… 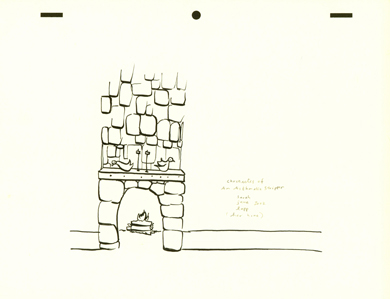 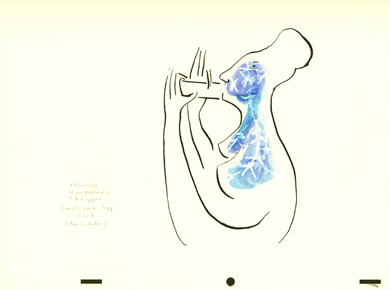 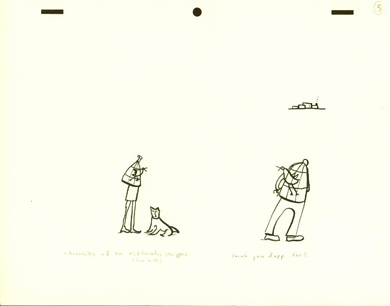