Lines Fiction: Marie is based on vintage film?

Karen Yasinsky: Marie is rotoscoped from a scene in the film Au Hasard Balthazar by Robert Bresson. I chose this scene for the melodrama of her dialogue and passivity of her face and lack of animation. She is a talking head in profile with an unchanging expression. I see the expression as blank bordering or sad. The dialogue, which was at odds with her image, is gone. Instead there is Brahms.

Lines Fiction: How does the music relate to the imagery?

Karen Yasinsky: All we see is a talking head. The Brahms piece provides the emotion.

Marie from Au Hasard Balthazar making choices that alienate her from that which she loves and eventually herself and her own life. She has lost faith. I want to begin with this state through the character of Domenico and his self-immolation. But then I want to draw back from the self and find an interconnectedness of all through constant change and movement of images. In this acceptance of constant transformation lies faith.

Lines Fiction: Your drawing process in the animation not only tells a story but also mimics technical issues of film and video: horizontal sweep frequencies, criss-cross and disturbance. In the end Marie resolves into vintage film. How did this special relation of drawing and film in your work develop?

Karen Yasinsky: I use a simple sort of drawing animation, tracing the image over a lightbox. If the object in the frame doesn’t move, I redraw it. I liked the fact that much was not moving, aside from her mouth at times. But, the lines of the traced drawing are never exactly in the same place. Tracing is an inexact form of copying. Since the line never resolves itself, there is a formal tension in this wiggle.

I tried to bring some violence into the work with the interruption of the head as that in a movie and make obvious it’s nature as a drawn image, a collection of marks or lines. It scrolls, pixilates and rotates. Strobing color pulsates the image for a period of time. Marie the character becomes a graphic fact. The Brahms piece is also manipulated to interrupt its beauty and respond to the moving lines, the hiccupping changing image, pulled from its narrative. This is at times harsh and aggressive and becomes a bit of an endurance exercise.

At the end I wanted a change from the formal manipulations, which the viewer is left to translate into emotion. I wanted a violent scene, unrelated to any specific narrative and an abrupt change from the repetition of Marie’s head. Marie ends with a passage taken from a dramatic silent film The Saga of Gosta Berling by Mauritz Stiller.The formal aggression becomes real in a scene of wolves ripping one of their own apart. This coda to the drawn animation of Marie talking comments not only on any formal aggression felt by the viewer but also can expand the meaning of the work into an acceptance of violence within nature including human nature. And the beauty of the wolves on the ice, the gentleness Marie’s pose and the elegiac quality of the Brahms composition give rise to the possibility of redemption in our relationship to beauty. Beauty as a truth.

These ideas on my process relate in a major way to my fascination with the work of Robert Bresson. For me, Marie is about the character within his film but also about Bresson’s ability to communicate an exultation of spirit or something existing outside of us. This accumulates and rises from works deeply pessimistic about the instincts of humanity. 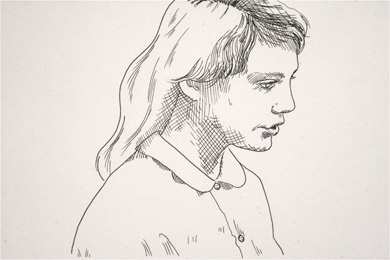 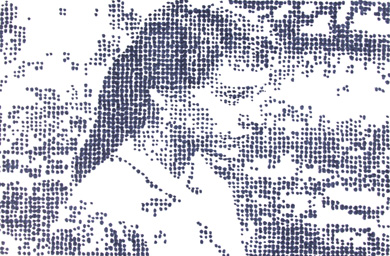