Lines Fiction: In 2016 you were invited to curate the German program for the international film festival Punto y Raya at the ZKM – Center for Media and Art, Karlsruhe. We should mention that Punto y Raya is coined as the “most abstract film festival in the world”. Even if figurative and non-figurative art nowadays is not anymore mutually exclusive, one finds pure abstract film in the tradition of absolute cinema less frequently than narrative approaches in contemporary art.

Robert Seidel: It’s surely remarkable that abstraction is a fully accepted genre in painting or photography but the moving image is perceived with a limited gaze. For my screening “Knorpelwerke” for Punto y Raya I deliberatively showed the borders of abstraction including “non-artistic” formats like music videos. As many artist, including myself, create hybrid forms of abstract concepts I even showed films in the screening that are usually interwoven into installation. Some works were truly overwhelming while unfolding in the black box of cinema.

Lines Fiction: How did you find your abstract universe of images?

Robert Seidel: I always was drawing and tended to get lost in details, for example of stones or plants, especially in my school years. I also loved to sit in the train or car with the transportation movement interfering and creating uncontrolled line traces on paper. In the end I was lucky that my parents provided me with access to a computer early on (which was not common in Eastern Germany) so I was captivated in a world of drawing software, 3d modelling, programming and fractal generators. The more I immersed into these possibilities the clearer it became that the computer allows to create “the unseen” which is not limited by physical, temporal or spatial properties. The “initial artistic impetus”, like for many other artists, was “Nude Descending a Staircase, No. 2” by Marcel Duchamp. This was building a very conclusive bridge between the real and the abstract for the first time.

Lines Fiction: How do these positions extend in your own works?

Robert Seidel: My first and artistic formulated works are classical experimental films, for example _grau or E3. These have been shown at numerous film and art film festivals. But only in comparison to the first exhibitions in art institutions I became fully aware of the concentrated experience in the cinema space – when the work is presented in a fluorescent light-flooded white cube with bad acoustics a lot of the impact gets lost. Of course this is due to the limited budgets of museums and the limited technical expertise. This is why I moved to projections on buildings and video installations where I could control my vision of abstract structure, texture and movement in a more captivating manner.

Lines Fiction: In your laser performance “magnitude” you fully leave the exhibition architecture and draw with light in the open landscape – another step into something “unseen”?

Robert Seidel: Drawings are the preliminary studies to all of my works, but they are rarely shown in exhibitions. While my residency at Epicenter Projects in California I was challenging myself to use the desert and canyons in the San Andreas Fault area as my drawing surface. Laser technology is used there for land survey and earthquake detection, so I found its artistic appropriation decisive. Because some of the performative laser drawing were kilometres in scale, I used long-time exposure photography to capture them in full detail. My own reaction to the different topologies and the resulting gestures put my drawing for the first time into their own group of works.

Lines Fiction: Besides your digital drawings you also use pen and paper as a starting point for your light installations. What does drawing on paper mean to you?

Robert Seidel: For most of my films and installations I am filling sketch books to create a vocabulary of forms and motion constellations. These are never recreated one to one, but are used as spontaneous, often gestural repertoire to find new impulses in the time-consuming work with 3d software or projection sculptures. In the last exhibitions I showed some works with pen, ink and graphite, but they were created after the sketching phase and are more focussed on specific aspects like textures or choreographies of the movies. Overall I am more interested in spatial drawings on my own or existing sculptures, buildings or landscapes but the intimate struggle with the pen in my hand hopefully finds its way into the next film. I just need to find a satisfying solution of putting them into a moving image… 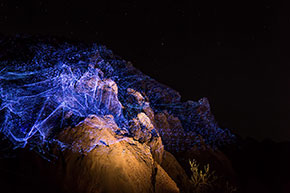 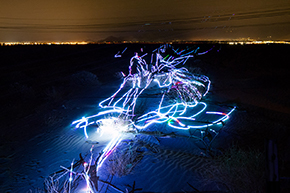 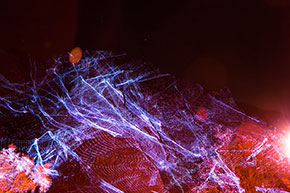 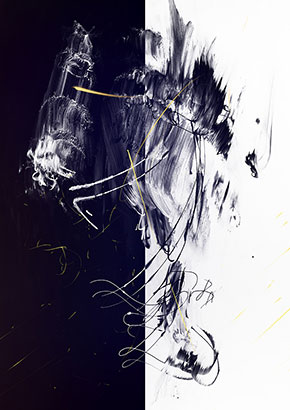