Lines Fiction: The first time I saw your film “Die Wartende” was in a group exhibition of contemporary drawings, 2011 in “Alte Schule Baruth”. Alte Schule is a Kunstverein (art society ) in Baruth, a village not far from Berlin. You are a member of the Kunstverein, and I was impressed by your initiative outside the city and its urban art scene. How did it start?

Susanne Rosin: The Kunstverein was founded in 1997 by artists and architects. Over the first couple of years we found out that the structure to organize one big exhibition a year is indeed the best way for us to work it out. We place the show in the late summer, and so the nice garden parties at the openings are very well received. At each exhibition we show the work of around 20 to 30 artists. And every show has a special theme, which often is connected to the place where we are located, a small village in Brandenburg with a historical background.
Especially when we leave the school building and show the artwork outside in the village, in the park designed by Lenné, or in the gardens, the exhibition becomes very unique and well connected to the location of Baruth.
Over the past years the Kunstverein “Alte Schule Baruth” showed more than a hundred artists, published catalogues, and became well known in Berlin.

Lines Fiction: The scene of the animation seems to be a view from a work place in a studio. But it is not the view from your window in Baruth?

Susanne Rosin: No, it´s a view from my apartment in Berlin. I am working in Berlin and Baruth. The interchange between these two very different situations became part of my work.

Lines Fiction: “Die Wartende” is not an animation shaped by pencil and paper, but the slow development of the scene shows a very graphical style. What a technique did you use for this clip?

Susanne Rosin: My work is based on an intense observation of space and flatness. To accent this, I construct the scene in a way that it looks like a “strange” place. It’s a practice, that overdraws and modifies the real space, but very inconspicuously, its hard to realize. In the animation “die Wartende” I tried to flatten the space, to change the three-dimensional space into a drawing by putting deep black lines onto the edges to outline the things. I use black tape to develop the animation. In the end the outline is done and the scene starts to live. 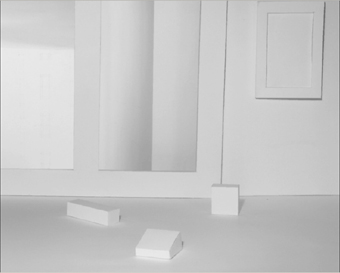 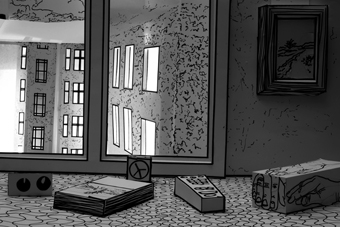