Lines Fiction: In an interview with ARTE in 2009 you spoke about “Keine Tricks” (No Tricks) as a slow movie. What do you mean by that?

Matthias Beckmann: when I started making drawings for the film “No Tricks” my first idea was not to make a film but a drawing that very slowly changes its form and content. So a slow movement would be necessary for the metamorphosis.
I wanted to make a film without a plan – without any cuts – just starting, being surprised by the direction the lines and the action will take. Another idea was to draw only things from life without any help from photographs or movies. As I normally work on site in public places like museums, churches, hospitals, industrial sites etc., I thought the best place to explore was my own studio. So everything happens on my drawing table. You see my lamp, a Scotch tape, a pair of scissors, and at the beginning of the film you can even look through the window and see what I’m seeing when I’m sitting there. In a way this film is documentary like my drawing series.
Also the allusions to art history, Dürer, Picasso, Hokusai and Menzel (represented by a hidden and fragmented quotation: “Alles Zeichnen ist nützlich, und Alles zeichnen auch” – “All drawing is useful, as is drawing everything”), are taken from reality, from real art books lying on my table. The film is a private homage to some of the greatest draughtsmen. For some time these heroes are all living and moving on my little table. That is fun.

You see, I began to talk, and step by step forgot to answer your question. Time is important. It takes time to make a drawing and it also takes time to learn making drawings. “No Tricks” is a slow film as I started it with a whole lot of drawings on paper. I never saw the movement of the pictures while drawing as I did not use a computer program. After about two years of work, very often interrupted by other projects, I went to the film studio of the UdK Berlin, the Berlin University of the Arts, and Walter Lennertz helped me produce the film. Only then, at last, I saw the movement and nearly nothing was changed.
As a draughtsman who is not a professional film maker I did not try to be as fast, tricky and perfect as specialists are. I wanted the movement to be slow to make it easier to follow the line produced by the black pen. I love the slow movement of the lines when I make drawings.

Lines Fiction: You are known as a draughtsman who records his surroundings. You document special localities – as there are museum spaces and artist studios – in pencil drawings that you are showing in exhibitions. I saw that you collect your 6000 drawings for the film ” Keine Tricks ” in a ring file, will these drawings be part of an exhibition?

Matthias Beckmann: The drawings are now in 14 folders, which looks quite bureaucratic. When I first showed the film in 2009 I exhibited some of them to show that the film is made from quite an amount of small drawings. And also to make people buy the limited and signed edition, including a DVD and an original drawing. Now I think it is better not to show them together with the film. Never show the work and the sweat necessary for a piece of art. It has to look easy and natural.

I like the film drawings, but somehow they are different from drawings made as a purpose in themselves. Perhaps you can compare the phenomenon to Greek sculptures of athletes, like the discus-thrower. In a traditional work of art – a sculpture, a painting or a drawing – the whole movement has to be represented by a single position. The Greeks chose the “fertile moment”, a position that gives us information about what happened before and what is supposed to happen in the future. This leads to a very powerful, autonomous picture. The different positions in a sequence do not necessarily have this power as they are not produced to be looked at for a long time, isolated from the rest. 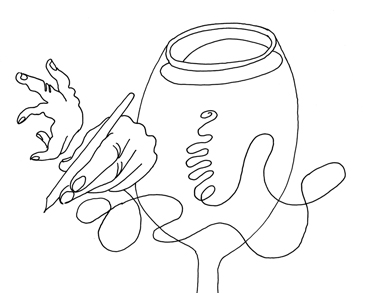 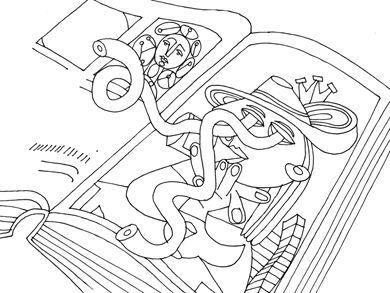 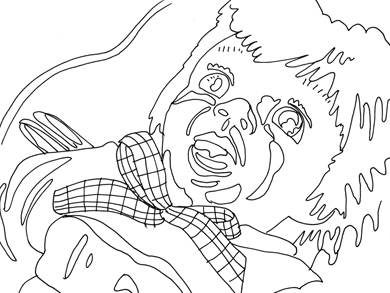