Lines Fiction: In these days when refugees in large numbers reach our borders, the reasons prompting their flight are sometimes drifting out of the focus of our imagination. Your project Apocalypse Management from 2009 does not describe a certain catastrophe, but shows an assemblage of images from disaster areas. Do you point out the missing capacity of mankind managing the disasters they bring about?

Chris Doyle: It’s true, Apocalypse Management doesn’t depict any one disaster, but blends together a great number of them. Some of these catastrophes are crises brought on directly by man, while others are natural disasters. These too are quite likely the result of our industriousness. At the time that I made it, I was spending a good number of hours on the web looking at images of war, flood, earthquake and terrorist bombing. I was becoming increasingly aware of the chaos and grief that accompanies these events, and that it seemed like they were happening at a frighteningly increasing rate.

We have come to believe that we can prepare for and manage these crises but we are not willing to do what it takes to try and prevent them. One thing that was interesting in all of the photojournalism surrounding these events was that I was seeing a moment of shock and horror before any kind of “management” begins. Apocalypse Management grew out of thinking about these moments. The characters in the piece all find themselves in various predicaments. The frustration and grief ultimately leads to a kind of transcendence. The sound track was really important in getting at the emotional experience that I was having. My sound designer, Joe Arcidiacono and I worked with two singers, directing them to improvise, focusing specifically on transitions from screaming and moaning to singing.

This piece was the first in a series that I’ve been working on for about seven years. It’s tied to a cycle of paintings by Hudson River School painter Thomas Cole called Course of Empire. The animation series deals with the way we pack all of our hopes and anxieties into landscape. The evolution of culture as separate and distinct from nature has brought us to a state of detachment, a situation in which we now find ourselves quickly undermining the conditions for our survival. The other works in the series include Waste_Generation, Idyllwild, and The Fluid. Each of these pieces take on different aspects of the cycles of empire, and cycles of nature.

Lines Fiction: You created watercolors in black and white that reflect your interest in natural processes, and you made hyper realistic images portraying people in special situations – has watercolor always been your medium of choice?

Chris Doyle: Watercolor has always been the way that I have worked out ideas. And I have always liked making them very large. It is a way of drawing that we think of as delicate and intimate, which I think in part is why I like working at the big scale with them. Interestingly, I when I started animating, I worked directly on the computer, drawing on a tablet rather than beginning in an analog way, animating the watercolors. So for a long time, the two aspects of my practice remained completely separate.

The black and white pieces that you mention are intended to be elegiac. They are watercolors of frozen waterfall. I started visiting waterfalls that have frozen over in winter. It seems to me that in these waterfalls, climate change is hard to ignore. Which is why they are painted in black and white. My new watercolor work, also in black and white, takes this a step further. I am mixing the pigment into different saturations, and then freezing it. I then draw with the ice as it melts onto the paper. I love the extra challenge of trying to control it. And I love the way it disappears as I paint. I have been making wallpaper from combining these pieces in various ways as well.

Lines Fiction: You often present installations of big watercolors together with an animation. How do you see the connection between these media in your work?

Chris Doyle: The paper is so important to the watercolors. For a long time, I just couldn’t find a satisfying way of bringing the two processes together. As a result, I often showed the work side by side. The ideas overlapped but they remained formally separate. And then I made Idyllwild, which feels very different from the other work. It was almost like a clean slate. Idyllwild is a two-channel installation. Custom software generates pairs of shapes, one on the wall and one on the floor. The shapes are like widows or portals to a constantly changing sky. But the sky is created by filming watercolor moving and changing on paper. The handmade work is framed by the digital tool.

Since then, I have been regularly bringing the two modes of working into the installation pieces. The frozen waterfall watercolors appear in The Fluid, a three-channel immersive animation that is a meditation on water in relation to climate extremes that we are experiencing in America, drought on the west coast, flooding in the east. It seems natural that a piece about water be in part made from water.

Apokalypse Management(telling about being one being living), 2009
5:32 Min. (looping)
Musik Joe Arcidiacono 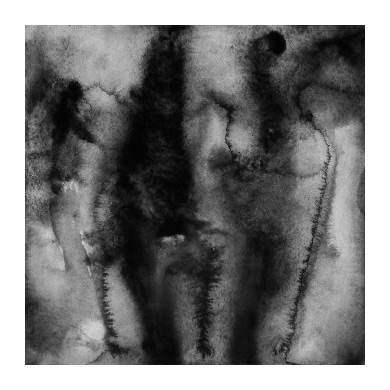 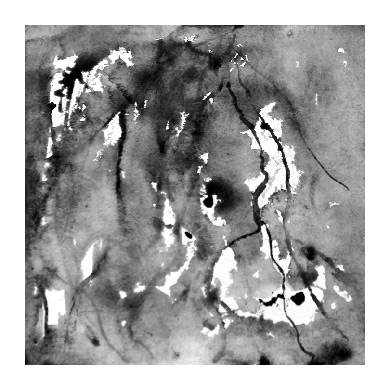 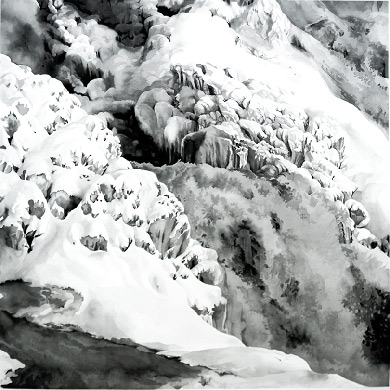 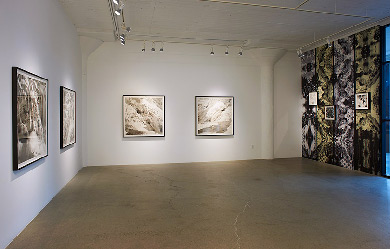