Lines Fiction: Besides your animations that can be viewed independently from your drawings you also use drawings and animations combined in one installation?

Bettina Munk: Yes, the different nature of hand drawings and moving images together in one installation complement one another. It gives the art work a new complexity, for both media require a different attention span.

In the installation String I show the animations Stringmoment & String on wall-mounted flat screens, and in between four drawings from the Series S_3.

Both animations show a number of dots emerging, then joined through pulsating lines. After a while everything disappears like a fleeting thought or is tying a net to create a swinging ephemeral body. The drawings between the monitors can be regarded as film stills. In these drawings an observer turns up as avatar for the viewer, and the dots mutate to part organic part geometrical forms. The drawings appear like close ups of the moving image.

The clip that I present on Lines Fiction can be understood as a visualization that shows the connection between animation and drawing.

Lines Fiction: You work with computer programs and chance operations?

Bettina Munk: I’m scripting in ActionScript for my computer animations. I scanned in pen and watercolor drawings like for wysiwyg_jazzy, and then I make them appear, move and disappear by programming. Coding a drawing or an animation always fascinates me. Code’s got its own beauty. In the animations Stringmoment and String I’m using chance modules that generate the spot of every dot. Then I’m drawing the swinging line from one dot to another through coding.

I also use a 3D program to develop animations, and the moving image interacts directly with the drawing. I used stills from the animation Unbekannte Elemente – plötzlich as templates for my drawing series Unbekannte Elemente (unknown elements). The animation, coded and developed in the depth of the computer, only gains reality in the drawing – that is the idea behind the installation.

In my animations a computer program generates the event by chance operations, in my drawings I throw dice for the composition, finding the location for each element by coincidence.

The concept is based on chance in an artistic tradition of John Cage. I am very fond of his conception of art and compostion. His ideas refer to the I Ging and Eastern philosophy, while my work is inspired by the concepts of quantum physics and the concept of probability – no contradiction anyway.

In English the term “chance” has a positive tone: “to get a chance”, an opportunity. In German it sounds more pessimistic – “Zufall”: something falls upon you, possibly ending in an accident.
I prefer the term “coincidence”. In our everyday life we experience strange coincidences that give our life a new turn until the whole life is formed this way. And in physics researchers are looking for the nature of coincidence that form the uncertainties of the universe we live in.

String, 2011
installation with 2 monitors (Animations Stringmoment and String)
and a series of drawings:
Series S_3, 1-4 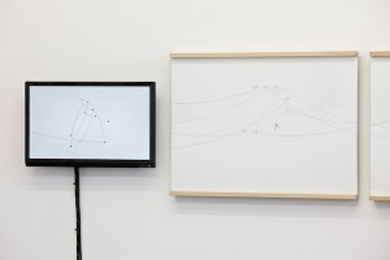 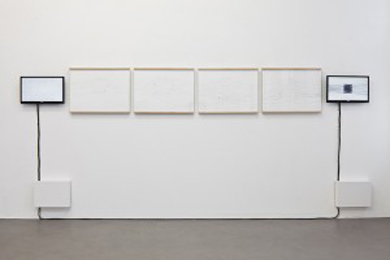 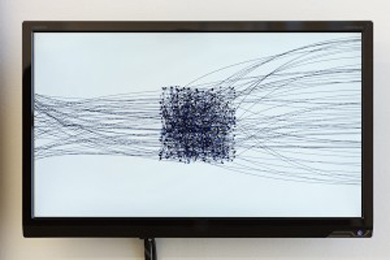 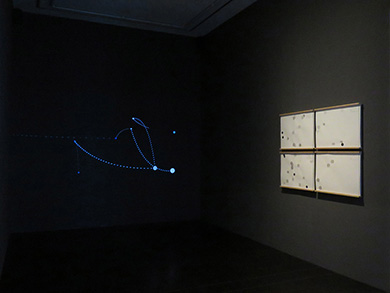