Lines Fiction: Your animations are narratives of everyday life in the city, and all its strange and funny aspects. With the drawing pen and watercolors you intensify the scene until you bring all details to an almost surreal point. How did you get to this form of storytelling?

Jennifer Levonian: So far, my animations have all been at least partially autobiographical. The Oven Sky (2011) is set in the quickly gentrifying neighborhood where I live. Most of the houses, signs, and neighbors depicted in the animation are true to life. The central story—newcomers pressure a longtime resident to turn her yard into a dog park—is invented, but it is one that I could imagine actually happening. Several neighbors have yards decorated with lots of lawn ornaments and I’ve heard friends comment that they wish that those private yards would be converted to public parks since open space is rare. These remarks made me interested in making an animation that questioned the subject of taste and land use as well as the way an interest group can sway city government.

Lines Fiction: Nowadays an animator who designs a complex story takes a shortcut with a computer program that helps modeling the movement and the scene.
You even decide against a traditional stop motion technique that would give the illusion of a fluent movement. Instead you clearly show that you use paper cutouts that you push around, and you use the computer program Photoshop only to add shadows highlighting the cutouts. This is a definite artistic decision. Did you have role models?

Jennifer Levonian: When I was studying painting in graduate school, I took an introduction to animation course on a whim. The first animation technique we learned was cutout animation and since I was already painting on paper with watercolors, I went back to my studio and cut up some of my paintings and started animating them.

To animate my paintings, I take a series of digital photographs of my cutouts against painted backdrops. Then I edit all the photographs together into a sequence in Final Cut Pro.

I use watercolors in these animations because the transparent and fluid qualities of the marks remind me of movement. The cutout puppets are a lot like paper dolls and I think this reference to children’s toys with all their innocence and simplicity is a nice counterbalance to the animations’ mature subjects, which are often satirical in tone. When I shoot the work, it is usually under natural light, and I try not to worry too much if the sunlight shifts.

I’m not opposed to computer animation, but I’m usually drawn to animations that have a handmade look. There is often poetic warmth to the work when the materials of the drawing process are unconcealed. I especially enjoy the animations of Joanna Quinn, Yuri Norstein, and William Kentridge.

Lines Fiction: Your watercolor drawings are very elaborate, are they important to you apart from being material for the animation, do you show the drawings in exhibitions?

Jennifer Levonian: Although I think of the animation as the primary work, I’ve exhibited the painted backgrounds and puppets alongside the animations in a couple of shows. The paintings are the part of the process I enjoy the most and I probably spend 90% of my studio time making them. I get very caught up in the details. I feel like if I can fill scenes with enough background detail, then there is a payoff for viewers who want to re-watch the work. 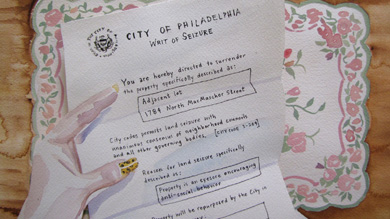 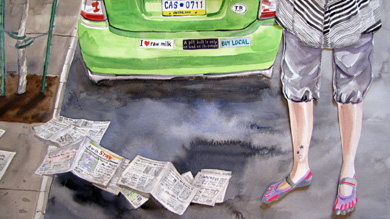